The event is open to all visitors holding an admission ticket to Fondazione Prada.

Places are subject to availability.

The music program takes places in the three environments of the Cisterna, creating a dialectic tension between artistic installations and musical pieces. In the room hosting Iglu, a work resembling a typical Inuit construction as well as an obelisk, a female voice intones a love letter by Claudio Monteverdi, followed by a dense succession of verses taken from comics and set to music by Cathy Berberian. The space in which Fumami, a wooden upward spiral, reminiscent of an antique amphitheater where visitors can enter, sit down and smoke, is hosted resonates in a musical dialogue between several voices performing intuitive music, selected from Karlheinz Stockhausen’s repertoire, alternated by a piece by Georges Aperghis. The exploration of sonorities prompted by musical improvisation allows the audience to perceive the space in an original way, freely moving around the installation. A piece by Nicolaus A. Huber, performed with Indian percussions, marks the end of the concert around Arc de Triomphe, an arch-shaped fountain housed in the central room of the Cisterna.

The event is open to all visitors holding an admission ticket to Fondazione Prada. Places are subject to availability. 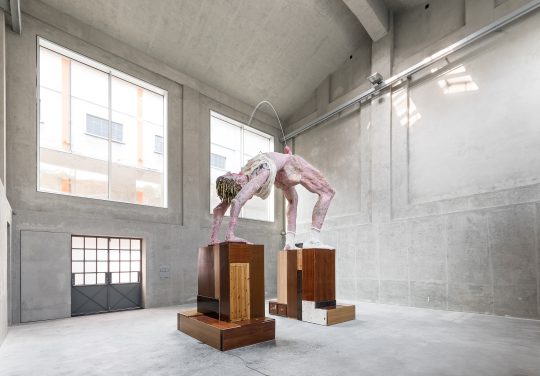